The Finite Element method is used to make a convergence study and a parametric study for T- tubular joints under in-plane bending moment. The tubular joint is modeled using a 9 noded, Hetrosis, thick shell element. ln order to simulate the actual behavior of the joint, material and geometrical nonlinearities are considered. The members material formed the tubular joint is assumed to be isotropic, elastic-perfectly plastic obeying Von Misses yield criterion, while a total Lagrangian formulation is used to include the effects of large deformation in the problem. The present study shows that the large deformation has a slight effect in strengthening or weakening the joint under in-plane bending moment. It is also concluded that the chord legth has a regardless effect on the ultimate in-plane bending moment behaviour of the joint. 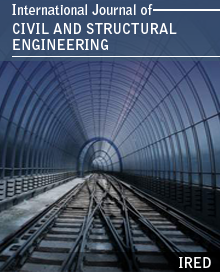